I actually finished it at the end of October before I made a brief visit to the UK but I at the time, I wasn't convinced  as it was so unlike the calendar image I was using but when I got back, I just knew it was complete. 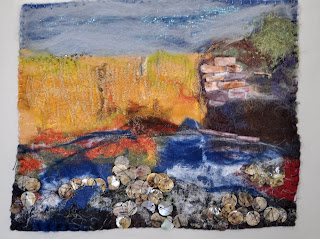 As usual I felted the ground of this image but instead of just using wool fibres, used some synthetic materials I had collected in my time, working at Joann's.  Some of them didn't work but it was simple enough to pull them out and try something else.  The bottom half of the piece is covered with shell pieces but the rocks on the right hand are some paper beads I made especially for this project.  I was pretty pleased with them :).  Below is the image I was working from and as you can see the rocks are probably the only thing that are similar. However, I like the feeling of depth I have managed to create in this work and would say its one of the more successful months.  The sky is pretty ominous with the lurex material peeping out like some alien arriving. I love the way the synthetic materials have managed to create some movement in the body of water.

I was going to add more beads to the cliff face but decided I loved the machine stitching too much to cover it up, so in the end, just added a few beads between the cliff and the sky.


Only 4 months left to do but then again only one month to go of the year.  I have felted the beginnings of the Sept, Oct and Nov but being realistic, know they wont be complete until at least the end of January.
Posted by jacqui boyd alden at 4:42 PM 3 comments:

My paintings and other work